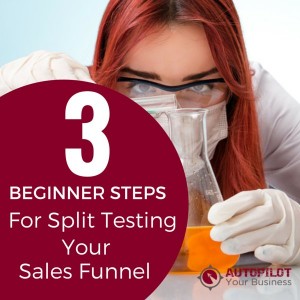 You know that saying; “what gets measured gets managed”? Split testing is a way of measuring what is working better, worse or indifferently when compared to the alternative so that you can choose to run emails, banners, landing pages and other website properties that are running for optimum results.

Before you freak out and head for the hills, this piece here has been written for those who are just building a working website funnel so our aim is to keep it simple! You can split test almost anything if you really want, but for this purpose we identify a few simple tweaks you can make and test within your website funnel.

What is split testing?

Split testing (also known as A/B testing) is the process of changing out elements (for example from a webpage) to find out what gives the best results according to your goal. For example, what gets more clicks? What gets more sign-ups?

Optimizely provides the following overview of what to split test:

Obviously you could go down an endless rabbit hole and spend your whole time split testing different things, but not everyone has the time or resources for that! We focus on three different areas of your funnel which you can split test easily for results: your Facebook ads, landing page headlines and email subject lines…

Let’s start with what is probably the first thing that (new) people who come into your funnel will see – your ad on Facebook. Here are a few steps for split testing Facebook ads:

1. Create an Ad If you are not yet familiar with creating Facebook ads, that is one thing we teach step by step in Digital Traffic Institute, or you can find information in the Facebook Help Center. Here we are just going to go through some basic steps for split-testing your ads… The first thing you will come to is a choice for what kind of ad results you would like. As we are talking about getting people into your website funnel, we would generally select “increase conversions on your website”, the conversion being the successful sign-up of prospects into your funnel. 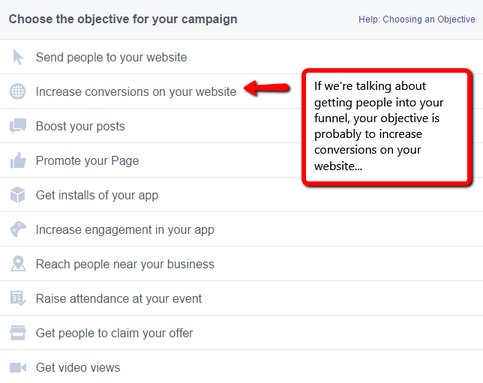 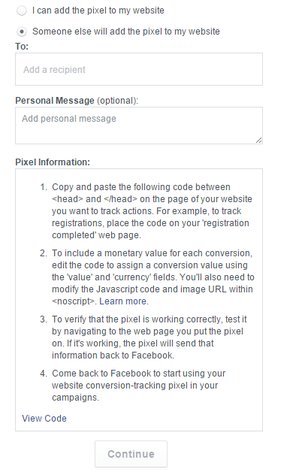 Next up, you will need to add the URL of your website and either a tracking pixel you have already created in ad manager, or you can create a new tracking pixel from here. (The tracking pixel is important as you want to measure the actual outcome of each ad rather than just clicks. For example, one ad may have more clicks, but less conversions than another). The pixel is a small piece of code which you add to the header of the webpage which you need to measure.

You will need to think about which page is going to tell you the results that you need to know – for example in the case of getting opt-ins, if the last page they see after signing up is your thank you page, then the thank you page is the one to be tracking with the pixel as it tells you how many people took the goal action.

You can choose to add the pixel to the webpage yourself, but we recommend that if you are unfamiliar with website code, you get someone else to do it for you (for example, find someone on Elance or a similar site).

Now we come to the parts you can change around to test your ads. Remember that a true split test only alters one element at a time so that you can tell what it was that made a difference.

Here is an overview of how it’s done: 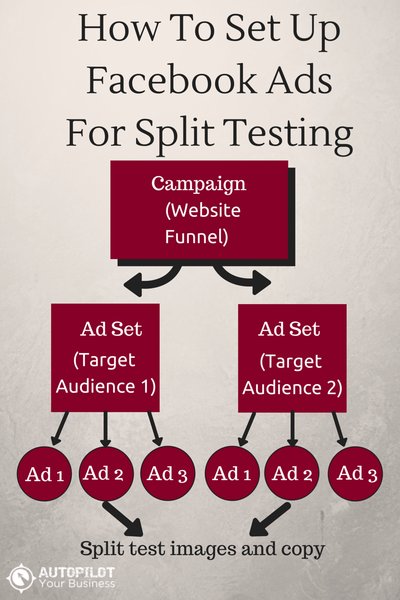 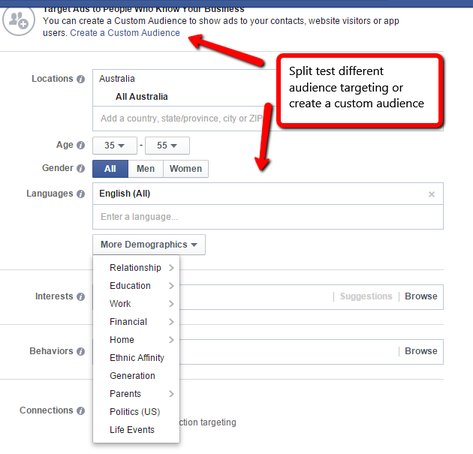 Ad Copy and Graphics – there are a few different ways you can test ad copy and graphics:

There is virtually an endless number of things you can shift around and test, the important thing is that you do test different combinations so that you develop a better idea of what works for you. Remember that Facebook ads tend to become stale after a few weeks so it’s important to regularly change them around. Here are our own examples – the only difference is the image used, but the ad with the hands is clearly out-performing the ad with the girl and the binoculars! 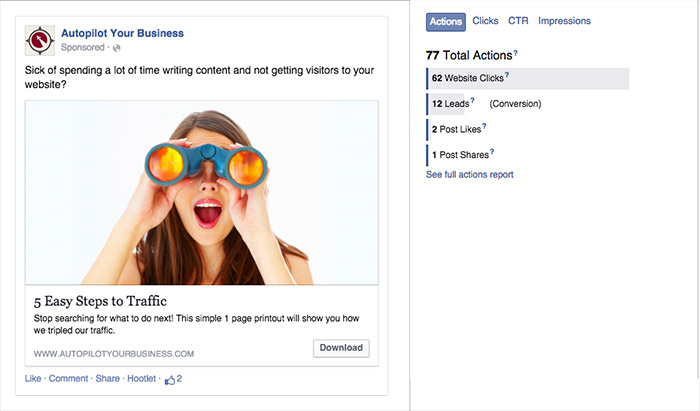 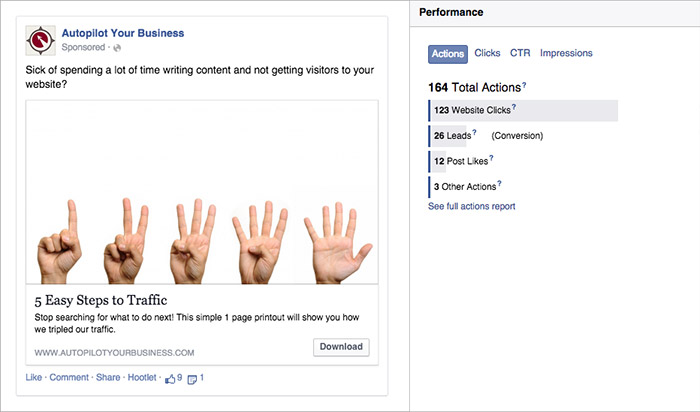 Experiment with your bidding – you have the options of clicks, daily unique reach (which ensures people only see your ad once in a day) or impressions (where your ad is shown as much as possible). Additionally, if you are running an ad set with the objective of website clicks, you will see “clicks to website” as an option for optimisation. 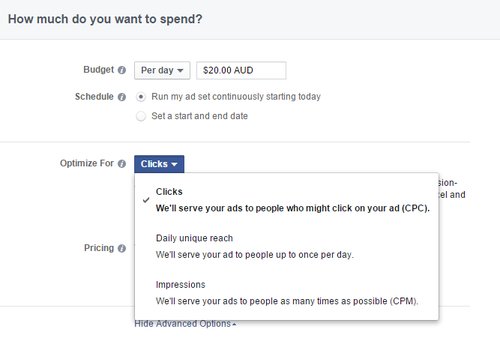 We tend to use cost per click, but your results will be a function of your ad budget and advertising goals so run some tests to see what works best for you.

Again, you could split test every single element on your landing pages if you wanted to, from changing button colours to swapping out different calls to action. We’re trying to keep it simple for developing your funnel so we suggest you start with split testing one thing – your headlines. There are different formulas that you can use in creating a headline – here are examples of the most common types used on a landing page:

How to split test your landing page headlines… Generally, you want to mix up your headline treatment so that you test out different formulas. Unbounce ran a few tests where they found that benefit-driven headlines usually came out on top, but of course it is not an exact science. Different types of industries will find that different headline types work best. You could even be testing out different benefits against each other, such as “Get More Traffic” vs “Get More Conversions”. What we would suggest, especially if this is all new to you is that you test only A vs B to begin with. Keep it simple – you can always add C, D and E later, the important thing is to get started and not get too tied up in complexities. Here are some pointers:

1. Enlist the help of A/B testing software – the idea is that you want to send half of your traffic to your “control” landing page and the other half to the B version, where you have changed the headline. Crazyegg and Optimizely are two of the popular tools out there and will split the traffic for you and show you your results. Use this step if you are creating your own landing pages and not using any of the programs we talk about next, but beware that this is definitely a more complicated way of going about your testing as it involves learning and setting up new software.

Tip for beginners: Seriously, make life easier by picking one of the platforms that allows you to split test without having to get extra software or integrate another program!

Split testing your email subject lines is a good way to learn about your audience preferences by determining the subject lines which get the most opens. How you go about split testing will depend on which email service provider you are set up with, but to start with here is a brief outline of how to test:

1. Decide what it is you want to learn about your audience There are infinite subject lines you could test but of course they won’t all be a fair test against one another. Campaign Monitor suggests that you try to think of all the uncertainties you’ve had when writing email subject lines such as:

Once you’ve decided what it is you want to learn, we suggest you start out by creating two different versions of your subject line, e.g.: “9 Essential Tools For Coaches” vs “Essential Tools For Coaches” You can always keep track of data over time by implementing a spreadsheet depicting what it is you are testing for. For example in this case it would be number of opens with a number vs number of opens without. As you test other email subject lines over time you can add them to your sheet and get a better overview of what works.

2. Determine your test rules To create a fair test, the conditions for testing need to be the same for each version of the subject line. Ideally you should:

3. Analyse your results As we have started by only split testing the subject line, your key measure is going to be open rates. (Later on when you test other aspects such as calls to action and other parts of the email content, you will look at factors such as click-through rates). Determine which subject line performed the best and use that information to deliver better email subjects to your audience. For a more thorough idea of what works, you should repeat a similar test over a few different emails, that way you know results weren’t just a one-off.

This article is intended as a suggestion for starting out at the most basic end of split testing. It can be easy to find yourself in an endless sea of data with all the possibilities of things to test in your sales funnel, but we suggest these three items as you can set each up for testing relatively easily and still get relevant results to improve your business. Pick something and start testing!